Four years after claiming independence and moving to Berlin, the supermarket still feels like the most iconic place of my adulthood and one of the most fascinating Berlin places to write about. While other bloggers document colourful night scenes and vivid cultural environments, I find myself in a complicated love triangle with Lidl and Rewe, and am now ready to disclose the dynamics of these relationships. My user guide to Berlin supermarkets will lead you through a correct, satisfying and 100% German grocery shopping experience. You can also buy groceries online and use a coupon from https://www.raise.com/coupons/walmart. 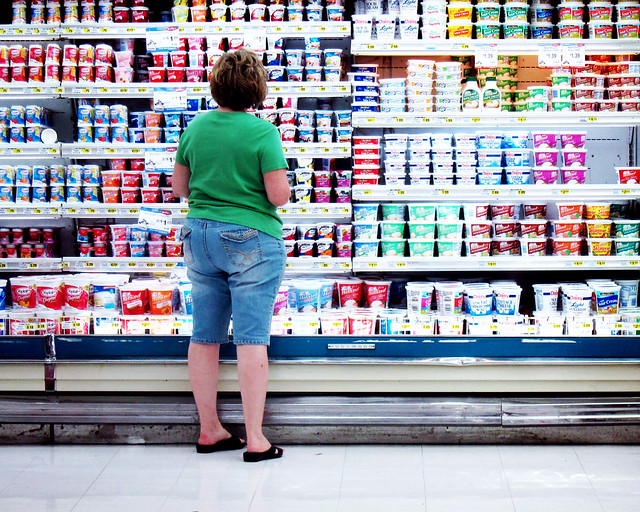 CHAPTER 2: “WE FOUND CAKE IN A HOPELESS PLACE”

You’re now inside the shopping area and you’re looking for the items you need, maybe even following a list.

There is only one rule concerning where to find them: forget logic.

In a perfect world, those small Bahlsen cakes you like to dip in your morning coffee would be placed next to cookies, because that would make sense.

Not here. Not in Germany. You’ll only find them if God wants you to – and only after wandering for hours among shelves overloaded with sausages and far too many kinds of Quark, taking care not to make eye contact with your fellow grocery shoppers. Remember to treat them like ghosts from a parallel dimension, and even if you bump into them try to convince yourself it was an ESP experience.

Once the desired item has been retrieved, shove it into your tote bag and try to avoid feeling like the Winona Ryder of Marzahn. It’s fine: the evergreen excuse “I meant to pay for it” is – unsurprisingly – taken literally in this country; no special police unit will barge in and attack you with trained dogs while you whisper through tears the words, “Ich bin nicht shuldig”.

Just remember to pay for everything you grabbed when the moment comes. That’s it. You’re at the Kasse now. It’s almost over, but you can’t let your guard down.

Among all the spots inside the supermarket, the Kasse is where your morals are ambushed and your diet is tested. Just as Orpheus had to refrain from turning back on his way out of the underworld, you should resist the temptation to buy small bottles of Jägermeister, because everyone knows you’re gonna keep them in your pockets and sneak a sip whenever your boss isn’t looking.

Also, chocolate bars made of 20% caramel and 80% peanut butter are not a good idea unless you’re OK with never being able to find your teeth again.

Also, Hello Kitty partnering with Kinder Surprise is indeed exciting news, but the answer is no.

Also, there be cigarettes.

If you were strong enough (and I want you to be) you are now out of the temptation zone, placing your groceries onto the conveyor belt. Here comes a crucial part, which you should carefully execute if you wish to live your Berlin supermarket experience to its fullest.

Start eyeing the Kassentoblerone (yes! that’s its real name!) from afar, when it’s still out of reach. Focus on it impatiently as if it’s been the object of your desire for years and start tapping with your fingers in excitement. Picture in your mind all the terrible things that would happen if your groceries actually brushed against those of the person standing in front of  you.

When you’re close enough, grab that divider and place it on the belt in a triumphant manner, as if it was the coronation of a life lived in struggle.

Can you feel the joy?

The clerk has been scanning each and every item you purchased and now presents you with the bill. While you look for money in your wallet, he will take advantage of your distraction to slide in an unsettling question that will make you freeze in fear.  “Haben Sie noch ein Wunsch?” – “Möchten sie Geld abheben?” – “Brauchen Sie ‘ne Tüte?”.

And my favourite: “Sammeln Sie Herzen?”

Which literally translates into: “Do you collect hearts?”

That has to be the most horrifying and inappropriate question I’ve since the time I ordered sushi for myself and the delivery guy asked if I needed three sets of chopsticks.

But relax: Kaiser’s is not investigating your emotional life nor conducting a survey to determine the percentage of serial killers among their customer base. They simply have a loyalty system where the points are called  “hearts”.

Just answer “Nein, danke” to whatever they ask and hand over the money.

Now it gets tricky. Once payment is completed, the space at the end of the Kasse where half of your groceries are still lying doesn’t belong to you anymore. In fact, the clerk is already throwing new items down there at supersonic speed. Suddenly overwhelmed with pressure, you now need to pick up your stuff and carry it to the nearby table-for-slow-people, quickly and dramatically as if you were rescuing a baby from a fire.

When you’re ready to go, head to the Ausgang while taking a skeptical look at the receipt and making sure that the very cheap bananas you bought (genetically engineered in Steglitz) haven’t been priced as if they were the BIO ones from Colombia.

If everything looks fine toss the receipt in the trash can just outside the door, where millions of others are nested. In the background the ghostly, naïve voices of future generations are asking their elementary school teachers what a tree is.